It has been an extremely peaceful day today since we decided not to go to Disney/Hollywood Studios to see the Osborne lights. A fellow teacher had mentioned it was the busiest traveling day of the year (which I confirmed on Google last night. Plus I found out this weekend is the busiest time of the year at Disney) and I knew my husband hated driving in traffic, so we decided to postpone the visit until next weekend. The million of lights are not going anywhere yet and it gave me time to create another card. : )
This card is going to be submitted into the Cricut Cardz Challenge #52 ~ Christmas themed with words only (no images). 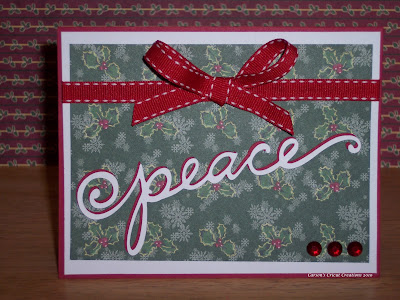 I hope you have a peaceful weekend.
Georgiana ﻿
P.S. What are some other good Christmas/Winter cartridges for the Cricut? I would love to know some of your favorites whether they are oldies or the new ones. I really am interested in purchasing another for variety. THANKS!
Posted by Georgiana at 11/24/2010 05:46:00 PM